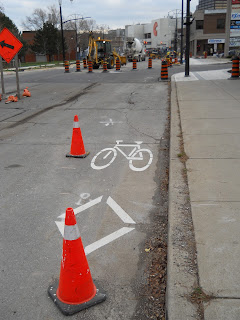 Some new bike lane paint on York Bld approaching the re-configured (converted to 2-way traffic with bike lanes) stretch between Bay and James.

A quick check with city cycling staff confirms that the bike lane will not be continuous from the existing lane ending west of Dundurn, and the new lanes, east of Queen. There are "sharrows" from Dundurn to Locke.

A fully integrated bike lane is included in the Cycling Master Plan, but according to staffer Daryl Bender "the challenge" is the narrow width of the existing asphalt.

A frequently voiced complaint among Hamilton's cycling, and would-be cycling community is the lack of continuous bike lanes. This latest project will, unfortunately, be another such example.

If we want to see more cycling, these broken links stand as barriers. Why not solve the challenge by taking one of the three one-way lanes on York in the "narrow" stretch and making it available to cyclists? Only then will the integrity of the lanes be intact.
Posted by Randy at 4:54 pm