A charitable foundation is offering up to $1 million to save the beloved-but-crumbling "clickety-clack" bridge on Valley Inn Road.

A repair or replacement plan was complicated by the discovery that the boundary with Burlington falls in the middle of the pedestrian bridge spanning the outlet of Grindstone Creek at the harbour. A municipal COVID-19 cash crunch made repair prospects even more grim.

That's why the Patrick J. McNally Charitable Foundation has offered to "cover the entire bill" for repairs up to $1 million, said Graham McNally, grandson of the foundation's namesake.

That work could include using cranes to lift the rickety bailey bridge out of its half-century-old home, repair the structure off-site, and carefully placing it back onto refurbished concrete abutments - likely sometime next year.

It's not yet clear whether a rehabilitated bridge would allow vehicle traffic once again. The current span was closed to cars a decade ago to prolong its life.

Yes, another survey from the city of Hamilton. This one about truck routes. Have a say, and feel free to comment about the survey: was it good? were there confusing sections?

The first thing to note, the survey was oddly presented on their webpage as a "Let's talk about trucks" tab - I think "Survey" would have sufficed, but the important thing is to add your voice to the discussion.

There are other groups working on the truck route study, like Environment Hamilton's Friendly Streets initiative, so check them out. We can add our collective voice to ensure a more balanced truck route plan to keep heavy trucks out of residential areas along arterial roads. 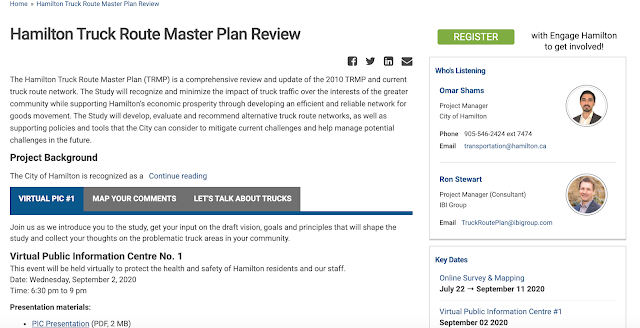 Here's a link to the Truck study page: https://engage.hamilton.ca/trmp

Here's a direct link to the survey: https://engage.hamilton.ca/trmp/survey_tools/lets-talk-about-trucks

Give yourself about 10 minutes, and feel free to share your experience here with us in the comments.

Tired of slipping on winter sidewalks? Make your voice heard!

It's tough to raise this during a heatwave, but the city of Hamilton has an online survey about winter maintenance of sidewalks. It closes on September 11, 2020.

We know how important it is to support people getting places on foot, and we see how the city leaves it up to individual property owners to clear snow from sidewalks. It doesn't work.

Telltale signs are images like seniors walking on the road because sidewalks are icy or snow-covered.

We don't know how many people can't leave their homes because of the sidewalk conditions.

We do know that the city ploughs sidewalks in front of schools, parks etc, but then they lift the plough to go to the next area. It's piecemeal and not dependable for people trying to get places.

Here's where you can help! 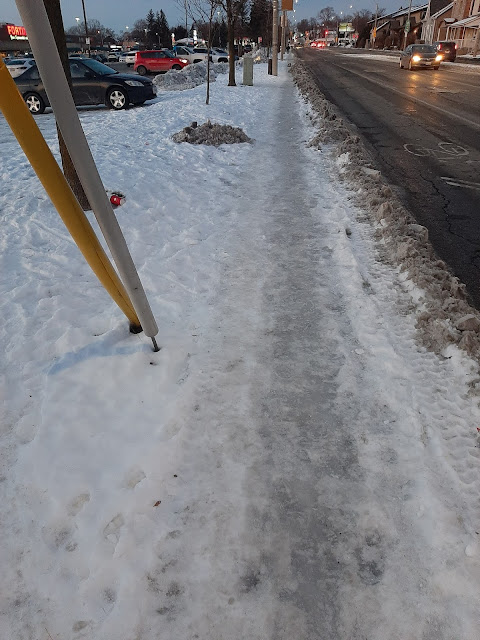 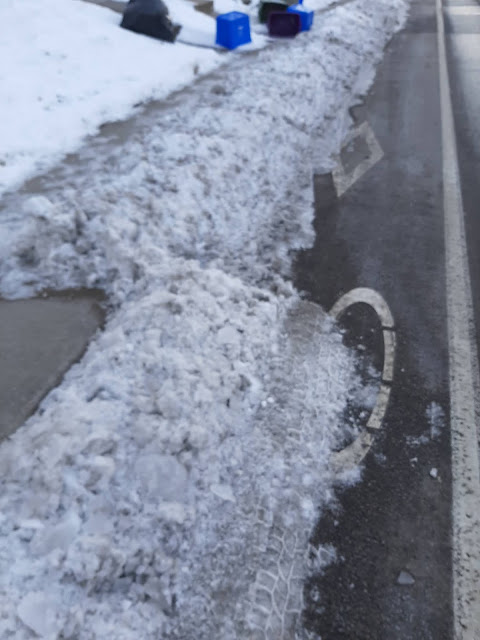 Thanks for taking action with us!

What is Hamilton doing?

What is the city of Hamilton doing to address COVID-19 and the need for more space for physical distancing?
It really feels like we are just sitting with the status quo, despite the obvious need to create more space for people walking, cycling or even just waiting for transit.
So far, I think the photo captures all the changes other than allowing some patios on streets and parking lots.
If you have anything to share on the topic, please let us know here in the comments.
If you are interested in forming a (virtual) working group to start addressing the lack of action, get in touch through our email (or sign-up using the form on this blog)
EMAIL: tlchamilton(at)gmail(dot)com
Posted by Randy at 5:26 pm 1 comment:

Kids in poorer areas of Ontario face greater risk of getting hit by cars, study finds 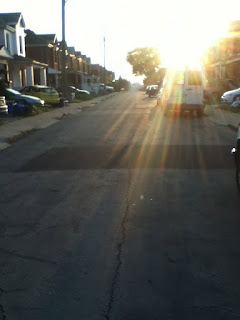 A new study suggests children from poorer areas of Ontario face a greater risk of getting hit by vehicles than those from wealthier areas, possibly because they are more likely to walk to school alone.

The study — conducted by researchers at Sick Kids hospital, York University and ICES, formerly known as the Institute for Clinical Evaluative Sciences — examined data on emergency department visits related to kids hit by cars from 2008 to 2015.

Overall, it found the number of ER visits for that type of incident decreased by 18 per cent over those years. But while kids living in high-income areas saw the number of visits drop by 22 per cent, those in low-income neighbourhoods saw an increase of 14 per cent.

The study's authors say that means children in the highest-income areas had a rate of ER visits due to getting hit by vehicles that was 48 per cent lower than those in the lowest-income areas.

"Simply put, poorer children are at an increased risk of getting hit by cars. Child pedestrian injury is a public health and health equity issue," the study's lead author, Dr. Linda Rothman, said in a statement.

"Although progress has been made in reducing preventable pedestrian-motor vehicle collisions, more work remains to be done. Our streets should be safe for all children to walk to school, to the playground or to the park," said Rothman, a senior research associate in child health evaluative sciences at Sick Kids.

"Simply put, poorer children are at an increased risk of getting hit by cars."

The researchers say reducing health disparities linked to socioeconomic status is a policy objective in Canada, and they wanted to see whether there had been progress when it comes to children getting hit by cars.

The study, published in the April 2019 edition of the journal Injury Prevention, suggests a few possible explanations for the phenomenon but does not come to a final conclusion.

Creating safer roads would ensure a safer walking environment for middle and high school kids who often walk alone and account for most emergency department visits due to getting hit by vehicles, the study says.

Younger kids, meanwhile, may benefit from having well-maintained playgrounds since a lack of playgrounds could lead them to play in the streets and be exposed to traffic, it says.

However, the study assigned income status based on the children's residence, not the site of the collision, so the link with the environment cannot be "definitively addressed," it says.

The data examined also did not include children who died at the scene of the collision, which means deaths are likely under-represented in the study, the document says.

The study found teens and preteens were at the highest risk of getting hit in the time period examined, accounting for 51 and 26 per cent of ER visits respectively. The majority — 73 per cent — of incidents occurred in cities, compared with 20 per cent in the suburbs.


Back in 2005 a few of the TLC crowd got together and put out the first (and only) issue of Trans-Mission zine.

Here's an online version of the paper copy, recently scanned for posterity, and sharing!

Email ThisBlogThis!Share to TwitterShare to FacebookShare to Pinterest
Labels: 2005, zine 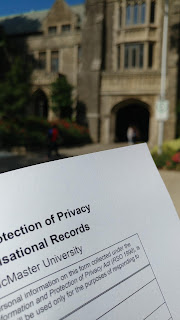 McMaster refuses to release the Transportation Demand Management (TDM) report that we initiated with McMaster, which happily included an early request to TLC from Pavlos Kanaroglou, director of McMaster Institute on Transportation and Logistics (MITL), to be part of the process.

The initial TLC/MITL meeting with McMaster's VP Administration Roger Couldrey, and then Director of Parking and Security, Terry Sullivan, resulted in MITL getting a green light to conduct the research that TLC was asking for.

The MITL report, handed over to McMaster in January 2016 remains a secret document, and TLC's numerous requests for a copy of the report were turned down by McMaster top administrators.

Why? We have no idea.

Last week TLC filed an appeal to the Ontario Privacy Commissioner since McMaster has rejected TLC's Freedom of Information request for the information.

It’s a report about transportation on campus. The report was initiated five-years ago after a letter from TLC Hamilton to the university resulted in a meeting and an agreement by McMaster to have the renowned McMaster Institute on Transportation and Logistics, invited to the process by TLC, undertake the research to prepare a report.

The subsequent Transportation Demand Management report was completed almost two years ago (January 2016), yet McMaster refuses to release the report to TLC Hamilton, first by ignoring numerous requests, then by rejecting the group’s Freedom of Information request.


TLC has filed an appeal of the decision to the


For TLC Hamilton the issue has become more about McMaster’s refusal to share information that they - even if they didn’t agree with the report’s findings - have no real reason to keep secret.

The principle of making McMaster research available to community partners shows up in every corner of the university’s guiding documents and policies, yet data about how many people park on campus lots or use various modes to commute to campus are somehow deemed off-limits?

TLC Hamilton believes McMaster’s obstruction goes counter to values TLC found with MITL Director Pavlos Kanaroglou, “a good friend of Hamilton.” A McMaster scholarship in Kanaroglou’s memory (he passed away in 2016) acknowledges his “commitment to both scholarship and citizenry” which TLC members felt defined their working relationship with Kanaroglou and the report author at MITL.

TLC Hamilton members are left trying to understand why the university is acting counter to these principles of collaboration and transparency.

QUOTE: “If the McMaster administration didn’t like the report findings, they could release it with that comment; instead they are violating the spirit of free enquiry and knowledge-sharing by blocking us from accessing the report, and forcing us deeper into the FOI process,” says TLC Spokesperson Randy Kay. “It’s an insult to the people who were involved in collaborating on the TDM report as well as the larger engaged Hamilton community.”
Posted by Randy at 11:22 am 2 comments: