who stole the sustainable?

Dundas as a liveable, walkable community, integrating cycling lanes and excellent transit service for citizens and visitors seeking healthy alternatives to the car is, unfortunately, not the emphasis we see 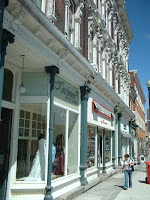 Instead, road widening, vague and non-committal talk of transit improvements, and further delays in implementing the long-overdue cycling improvements are the order of the day. This is not the emphasis we desire, nor expect.

The question that poses itself is, why? Why are cyclists being asked to wait for new bike lanes, when they've been waiting decades for lanes identified in the Shifting Gears Cycling Plan? Why is a previous city decision to widen Governor's Road not being challenged by this process, being out of step with the stated objectives of the plan to support active modes? If we are to accept the plan's guiding principles aim of "emphasizing active transportation, public transit and carpooling" and to "Enhance the liveability of neighbourhoods," the Downtown Dundas TMP does not deliver.

Why, in identifying "potential problems or opportunities and related alternative solutions," does the study dismiss taking immediate action to improve "active transportation" and focus in 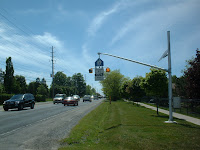 stead on potential "delays at a number of locations as a result of the travel demand growth anticipated by 2031." TLC's position is that creating integrated cycling lanes and paths, improving the walking environment, slowing the speed of traffic for improved safety, and increasing the level of service for transit should be the first priority. If we want to create conditions for people to choose modes other than cars for at least some of their trips, there really is nothing more effective than having the supports in place. Regarding the worry about delays, we should expect delays if too many people are driving, and accept this as a predictable outcome of our current emphasis on cars. If, instead, we identified the problem as "too many single occupancy vehicles creating hazards for pedestrians and cyclists, creating un-liveable conditions for residents, taking up valuable space in the downtown for parking" etc. we would have a better starting point.

In the Evaluation of Alternative Solutions chart the first item dealing with Governor's Road/Ogilvie Street presents options for: widening governor's to three lanes, widening Governor's to four lanes, or installing a roundabout, and settles in favour of the maximum widening scenario; there is absolutely no evaluation of TLC's suggestion to close Ogilvie to cars at Governor's Road which would make the intersection safer, enhance the natural environment, and create a more liveable community by enabling pedestrian access to Spencer Creek and creating a car-free cul-de-sac in an area with a large population of seniors. For some reason, keeping the same lane configuration but adding a northbound (protected permissive) left turn phase, is also not considered. Any changes identified in this plan should make the priority first pedestrians, then cyclists, then transit and finally automobiles; accepting a potential for a slightly lower level of service to cars has to be part of the trade-off if we are to ensure walkability and security for pedestrians, especially at this notorious intersection where a senior was recently run-down and killed. Widening the road only serves vehicles at the expense of other modes, increasing the opportunity for speeding and overtaking, while adding to the crossing distance and the number of conflict points for pedestrians at this intersection. This intersection already features two unprotected pedestrian crossings in right turn "slip lanes" which present added danger to pedestrians; therefore, we suggest exploring the potential to remove these off/on ramps connecting Governors and Ogilvie, or adding raised crosswalks.

At Hatt Street/Memorial Square, the DDTMP recommends widening the intersection for a southbound right turn auxillary lane; TLC opposes this since it will increase crossing distance for pedestrians, and add another conflict point (i.e. another lane of traffic making turns) for pedestrians and cyclists using Hatt Street. TLC would prefer an alternative approach, perhaps examining the possibility of a roundabout at this intersection, or the status quo with tighter turning radii.

In the report, a pedestrian crossing on Hatt Street at MacMurray Street (the only other crossings found at Ogilvie and Market/Creighton) is rejected as not warranted, yet a pedestrian activated light as suggested by TLC is not mentioned as an alternative, only a "four way stop" and "fully actuated signals". The distance between current crossings on Hatt are approximately 743.m. which is too great a distance to be conducive to strong links for pedestrians in residential areas south of Hatt and the primary business district to the north of Hatt. A pedestrian activated light should be installed in this area, in conjunction with traffic calming on Hatt required to ensure driver adherence to posted speed limits. The recent extensive residential development on Hatt St will dramatically increase pedestrian traffic in the area. The TMP must consider that change in traffic pattern and adopt as a first priority a redesign of Hatt St that focuses on narrow car lanes, safe pedestrian crossings, and cycling lanes.

The section on Cycling Facility Alternatives sadly prolongs the disregard for cycling in Dundas by having no short term improvements beyond "signing and information" and then lumping a series of improvements of varying complexity together under "medium term" including such simple items as "signed on-street bike lanes on Bond Street (Hatt Street to King Street) with much larger improvements such as "paved shoulders on Olympic Drive/York Road (Cootes Drive to Maryvale Avenue) as per HTMP." According to time-lines set out in the 1998 Shifting Gears Cycling Plan, Hatt Street was to have been re-striped for bike lanes by 2001, Former Highway 8, Bond to Bullocks was to be rehabilitated and widened by 2002; the Hamilton TMP identifies Hatt Street between Main Street and Bond Street for Bicycle Lanes in the short term; these priorities do not appear in the short term timelines offered in the DDTMP. This sort of delay can only frustrate the citizens desirous to use "active transportation," the very same people the city should be encouraging according to the guiding principles outlined in Vision 2020 and the TMP. As such, TLC's position is the medium term improvements identified in the DDTMP need to be moved to short term, in keeping with the TMP and the Shifting Gears priority, and to ensure an integrated and useful cycling network in Dundas linking to the larger cycling network. The cost for implementing the cycling infrastructure would provide a great deal of practical aid to cyclists, at a small fraction of the costs associated with road widening, for example.

We are also curious about the Long Term bicycle parking being focused on Sydenham Street (between King and Hatt); the current bicycle racks (ring and post) installed there are out of the way and therefore little used, whereas convenient bicycle parking near shopping destinations on King Street are lacking. The current configuration of bicycle parking was done without input from cyclists and reflects this in the lack of convenience in siting the racks. Bicycle Parking should be convenient (accessible), visible and secure; Sydenham is therefore not a good starting point since it is primarily parking lots for cars. TLC does not share the view that it is a good idea to wait before "expanding to other areas of the Downtown." TLC suggests taking an auto parking space on King and installing bicycle racks if space on sidewalks is an issue.

Generally, turning radii should be systematically reviewed and tightened at intersections in the study area to ensure pedestrian safety: "A wide curb radius typically results in high-speed turning movements by motorists. Reconstructing the turning radius to a tighter turn will reduce turning speeds, shorten the crossing distance for pedestrians, and also improve sight distance between pedestrians and motorists....Where there is an on-street parking and/or bicycle lane, curb radii can be even tighter, because the vehicles will have more room to negotiate the turn. Curb radii can, in fact, be tighter than any modern guide would allow: older and some neo-traditional cities frequently have radii of 3 to 4.6 m (10 to 15 ft) without suffering any detrimental effects." (http://www.walkinginfo.org/engineering/crossings-curb.cfm).

TLC would also like to review plans for a multi-use trail along Spencer Creek: any designs that encroach on the natural setting should be generally discouraged: TLC would prefer, where possible, to have a multi-use path along the north side of the creek, while maintaining the current footpath on the south side, with some site specific improvements. Cyclists will have parallel routes on Hatt Street, and Governor's Road once the TMP is complete, so the need for a multi-use path may not be as pressing along the length of Spencer Creek.

For a plan that aims to set the direction for a sustainable and balanced transportation future, this plan falls very short of the mark. In moving from the goals that supposedly guide us to a new, more balanced way of looking at transportation in the city, the city far too often loses its way and gravitates toward the status quo when it comes time to actually implement on the ground. The one exception is the recommended roundabout for Governor's and Davidson, which TLC supports.

Pedestrians and cyclists' needs should be prioritized, meeting, as they do, all the main guiding principles of the City's TMP: safe, convenient, active, enhances liveability, encourages more compact urban form, protect the environment, supports local business and economic development, efficient and affordable. Road expansion meets none of the guiding principles, and as such, should be identified as the lowest priority, and dropped from the recommended changes.

We hope these comments are taken into consideration with the goal of creating a balanced transportation network in Dundas.

for Transportation for Liveable Communities

tlchamilton.org
Posted by tlc at 8:17 am

This is a heck of a lot to take in at one sitting. I'll need to come back to digest this article a piece at a time!